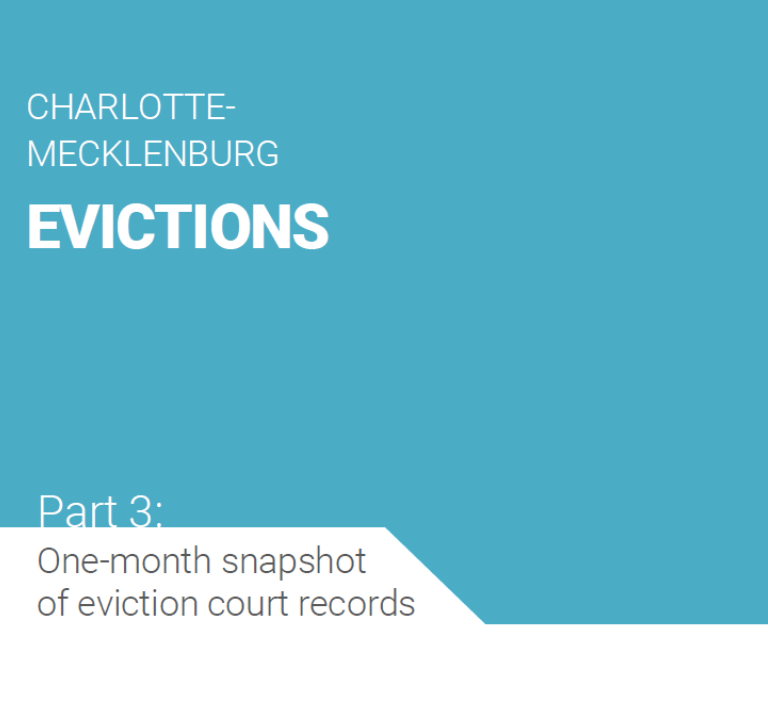 The report marks the first time local eviction data from court records have been analyzed and reported.

The first report in the series “An Introduction to Evictions in Charlotte-Mecklenburg” released in September 2017 provides an overview of the formal eviction process and shows that evictions can have ripple effects beyond housing, impacting the overall health and long-term well-being of families as well as the stability of neighborhoods. The first report also provides local data on evictions in Mecklenburg County. During FY 2015 – 2016, there were 28,471 households facing formal evictions in Mecklenburg County – about 2,400 households each month. Low-income black women are disproportionately impacted by evictions and families with children are more likely to be evicted. Employment and rental history are also two predictors of eviction.

The second report, “Mapping Evictions” released in March 2018 maps evictions in Mecklenburg County at the neighborhood level, showing where formal evictions occur and exploring characteristics of neighborhoods with high and low rates of evictions. From FY2003 to FY2015, the number of areas where evictions are concentrated increased and gradually shifted outward toward the suburban edges of the county. The report reveals a geospatial pattern of evictions resembling the ‘crescent’ and ‘wedge’ and underscores the reality that not all Mecklenburg County residents have access to the same opportunities for housing stability.

THE THIRD REPORT COVERS HOW & WHY EVICTIONS OCCUR

The third report builds off the first two reports on evictions by focusing on how and why tenants are evicted and the cost of evictions for landlords and tenants.

A formal eviction involves a legal process in which a landlord attempts to regain possession of a leased premises from a tenant. Tenants also may be informally evicted outside of the legal system which can include when a landlord increases rent resulting in tenant displacement. The eviction data in the report series refer to formal evictions, which is likely an undercount of all evictions that take place in Mecklenburg County.

The eviction data in this report are from small claims court documents during the month of July 2016, which are not currently electronically available. A research team made up of trained staff and volunteers coordinated with the Mecklenburg County Clerk of Court to identify, manually scan and enter data from the court documents. Each document is associated with an important point during the eviction process.

Analyzing the information from these documents provides unique insight into the details of the complaints filed and whether the cases that are filed result in a formal eviction.

WHAT TO LOOK FOR IN THE REPORT

The three components covered in the report allow us to better understand how and why evictions are occurring in Mecklenburg County.

These components also help us to develop solutions for positive change. This includes how we can help to level the playing field for tenants, strengthen the relationship between tenants and landlords and identify system and policy change strategies that can create short-term and long-term impact for Mecklenburg County residents.

In addition to the report release, a toolkit developed by Mecklenburg County will be available to help convert the information from the report into action. Both can be accessed on this site under “Housing Instability Reports”, beginning Wednesday, May 23.