THE LONGEST NIGHT OF THE YEAR

Yesterday – December 21 – was the winter solstice: the shortest day and the longest night of the year in Earth’s northern hemisphere. It signals the official start to the winter season, although cold weather has already come to visit Charlotte-Mecklenburg. December 21 was also National Homeless Persons’ Memorial Day, a day to remember people in communities across the United States who have died while homeless in the past year.

On November 16, Charlotte-Mecklenburg remembered over 50 individuals who died in the past year. There were 28 people who were homeless when they died.

Point-In-Time Count data show that unsheltered homelessness has steadily increased in Charlotte-Mecklenburg since 2014. In 2017, there were 215 people who were counted on the night of January 25. Unsheltered homelessness is a “type of homelessness in which people have a primary nighttime residence that is a public or private place not designed for or ordinarily used as a regular sleeping accommodation for human beings. It includes the street, parks, camps, vehicles, storage units, and bridge underpasses.” 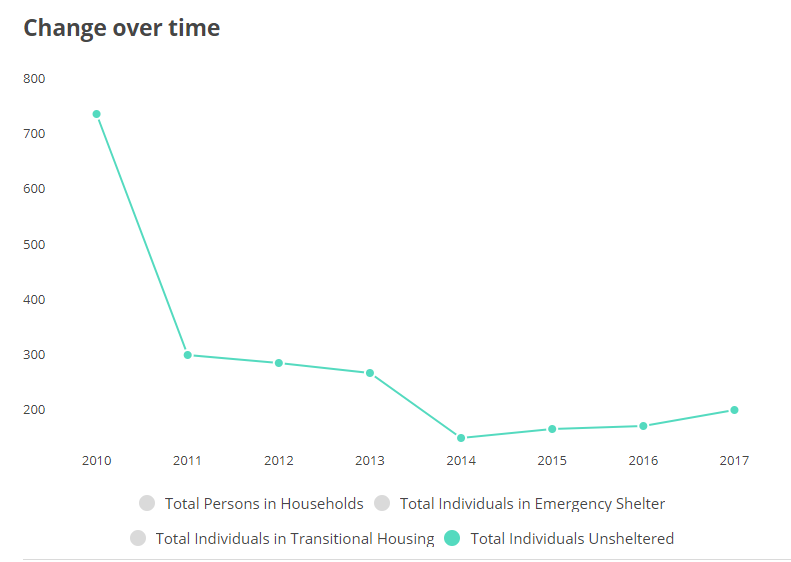 A LOOK AT THE TRENDS

A report from July 2017 by the National Alliance to End Homelessness (NAEH) on Unsheltered Homelessness and the recently released 2017 Annual Homeless Assessment Report (AHAR) to Congress by the U.S. Department of Housing & Urban Development (HUD) provide insight into the recent increase in unsheltered homelessness:

The increase in unsheltered homelessness nationally is “driven by a few CoCs that count large numbers of unsheltered individuals and those that report consistent increases or decreases over time” (NAEH, 2017). Communities with more than 1,500 unsheltered individuals in 2016 and consistent increases for the past 5 years include Los Angeles County, CA; San Francisco, CA; Seattle, WA; Alameda County, CA; and Monterey and San Benito Counties, CA. For many communities across the United States unsheltered homelessness is generally decreasing and fewer communities are reporting unsheltered counts over 3,000 people.

Since 2011, Charlotte-Mecklenburg’s overall population experiencing homelessness on the night of the Point-in-Time Count has been steadily decreasing.

WHY IS UNSHELTERED HOMELESSNESS INCREASING?

The National Alliance to End Homelessness reports more recent studies have found connections between the rate of homelessness and housing market variables like median cost of rent, cost of rent for the lowest 10% of units, ratio of rent to income, and vacancy rate; but, studies rarely focus on the relationship between those factors and unsheltered homelessness.

Several of the areas with the highest counts of unsheltered homelessness nationally are also among the highest cost rental markets – especially along the West Coast. The other factor often considered is the number of available and affordable units for extremely low-income renters, who earn income at or below 30% of the area median income. Charlotte-Mecklenburg has only 30 affordable and available units for every 100 households at or below 30% of area median income, which is lower than the national number of 35 units.

Beyond affordable and permanent housing options, it is important to look at these factors: 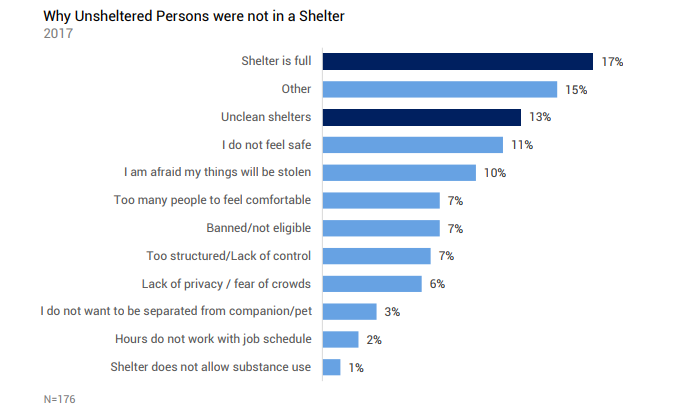 After the winter solstice, days start to get longer as we move forward to Spring. However, there’s an old proverb that says: “As the days lengthen, the cold strengthens.” North Carolina will most likely not experience its coldest temperatures until January.

For those experiencing homelessness out on the streets, in cars and parks and under bridges, the nights will continue to feel long. And cold.

December 21 is more than a day to remember those who died while homeless in the past year. It is a reminder for all of us to pay attention to the people who we see every day experiencing homelessness and to make 2018 a year where no one dies while homeless outside.