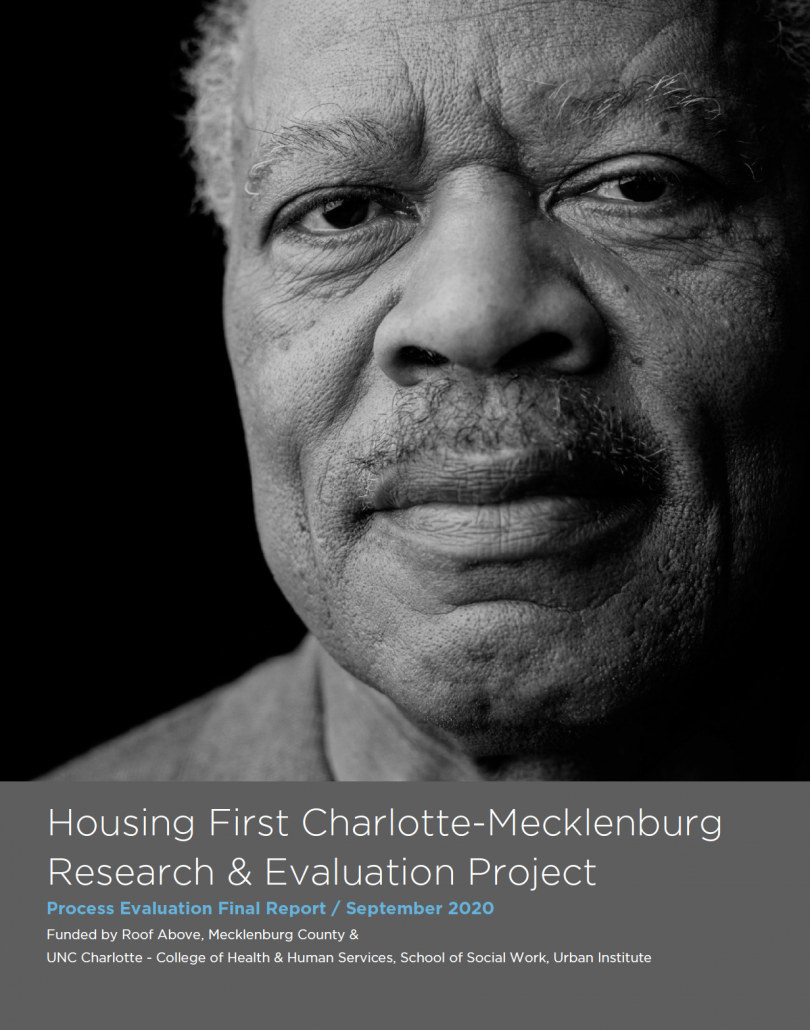 Housing First Charlotte-Mecklenburg (HFCM) was launched in 2015 to end chronic homelessness in Charlotte-Mecklenburg by scaling housing first, particularly the housing first permanent supportive housing model. Housing first programs prioritize housing as an early step in service delivery, have low-barrier admissions policies, maximize client choice in housing and services, use a harm reduction approach to substance use and other personal challenges, and do not require service compliance or success in order for a tenant to maintain housing. The multi-sector collaborative effort included stakeholders from homeless services, local government, nonprofits, and the business community.

Today, the HFCM research team from UNC Charlotte, in partnership with Roof Above and Mecklenburg County, released the first of two summary reports from the multi-year research and evaluation project examining the effort. The Housing First Charlotte-Mecklenburg (HFCM) Process Evaluation Report summarizes findings about how the multi-sector collaboration to end chronic homelessness was implemented.

This blog post will highlight some of the key findings from the report and what they could mean for Charlotte-Mecklenburg.

WHAT IS A PROCESS EVALUATION?

Evaluation is typically associated with outcomes and understanding the effectiveness of an intervention or “change effort.” Ultimately, an evaluation helps answer questions such as: Did what we do work? Did investment in this intervention or change make a difference? This information is critical to inform future investment and if necessary, modifications to interventions.

However, it is equally important to understand how the work was done. How interventions and efforts to create wide-scale change are implemented is inextricably linked to the outcomes achieved. Who was served? How were services provided? What did collaboration look like? Who was included? What did leadership look like? What barriers were encountered and how were they overcome?

The report released today suggests a number of successes, which are described in detail below:

Over 1,000 people housed. As of January 2020, 1,011 individuals experiencing chronic homelessness (homeless for over a year and with a disabling condition) were housed. Evaluation of the By-Name List, a list of all identified individuals experiencing chronic homelessness in Charlotte-Mecklenburg, from 2015 to 2018 suggests low rates of return to emergency shelter. The outcomes report, which takes a deeper dive into the data, suggests high housing retention rates, particularly for individuals in housing first permanent supportive housing.

Orientation toward permanent solutions. HFCM facilitated a reorientation of chronic homelessness services from crisis management to permanent housing solutions, particularly through the use of housing first permanent supportive housing.

Initiative infrastructure. HFCM developed a project infrastructure to support the effort that did not rely solely on already over-extended resources and services. Collaborators brought over $1 million to the effort, stimulating additional financial and in-kind investment from Inlivian, Crisis Assistance Ministry, Mecklenburg County, and UNC Charlotte. Funding was used to develop a project management infrastructure that propelled early housing success. This infrastructure facilitated:

In addition to successes, the process evaluation describes important areas for improvement as the effort to end chronic homelessness continues.

Support the philosophical shift. The housing first approach represents a philosophical shift from what might be considered “traditional homeless service delivery.”  This kind of change requires a shift in thinking from the front line to the boardroom. In the Housing First model, housing is considered the foundation; it is not provided in response or as a reward. Therefore, services begin where the individual is instead of requiring a threshold of eligibility criteria. In the study, stakeholders suggest that multiple layers of support are needed to facilitate and sustain a lasting change in philosophy even among organizations that are housing first proponents.

Address Infrastructure Improvements. Like any initiative, HFCM faced a number of internal and external challenges as the effort unfolded. HFCM stakeholders noted several lessons learned about the initiative, including:

The process evaluation findings highlight what worked and what could work better in both the ongoing work of the homelessness services sector and in the multi-sector collaborations that the Charlotte-Mecklenburg community frequently mounts to tackle tough issues. How work is done is linked to what is accomplished, and it is as important and as instructive. The key findings highlighted in this blog post are discussed in further detail in the full Housing First Charlotte-Mecklenburg (HFCM) Process Evaluation Report.

The second evaluation report, scheduled to be released in October, summarizes findings from the HFCM Outcomes Evaluation and Utilization Study. This report will summarize how housing provided through the HFCM initiative impacted both individuals and service use.

The HFCM research team includes researchers from three UNC Charlotte colleges and the UNC Charlotte Urban Institute. The team also included several community research associates, including two peer research specialists. More than 20 students participated over the course of the project, several of whom now work full-time in local homeless services. Dr. Jennifer Troyer, Dean of the UNC Charlotte Belk School of Business, and Dr. Sam Tsemberis, a founder of the housing first permanent supportive housing philosophy, consulted on the research. The full research team is listed in the report.

A research project of this magnitude is only possible through the support and coordination of multiple partners and resources. The HFCM research and evaluation project received financial support from Mecklenburg County; Roof Above; the UNC Charlotte College of Health and Human Services, the School of Social Work; and the UNC Charlotte Urban Institute. We are also grateful to the many community leaders, service providers and individuals with lived experience in chronic homelessness who participated in the research and made this research project possible.

Contact LoriThomas@uncc.edu for more information about this report or the HFCM Research and Evaluation Project.

Lori Thomas is the Director of Research and Faculty Engagement at the UNC Charlotte Urban Institute, where she also directs the Institute for Social Capital Integrated Data System. She has been a faculty member in the UNC Charlotte School of Social Work for 12 years. She is the Principal Investigator of the HFCM Research and Evaluation Project.

Joanne Carman is an Associate Professor in the UNC Charlotte Department of Political Science and Public Administration. Dr. Carman has been a faculty member at UNC Charlotte for 15 years and she is the 2020 recipient of the Bonnie E. Cone Professorship in Civic Engagement. She led the process evaluation of the United Agenda for Children and has worked with Dr. Thomas to lead the process evaluation of HFCM.