New Report on Homelessness and What It Means for Charlotte-Mecklenburg

A new report called The 2017 Annual Homeless Assessment Report (AHAR) to Congress released this week by the U.S. Department of Housing & Urban Development (HUD) provides national and statewide numbers on the number of people experiencing homelessness on one night in January 2017.

This blog post will break down information in the new report, compare the new information to local Point-in-Time Count numbers, and offer three takeaways for Charlotte-Mecklenburg.

What is the report?

The AHAR is the first part of two reports that are submitted annually to Congress by HUD to inform funding and policy decisions. It provides national data from the 2017 Point-in-Time Count and includes estimates of people experiencing homelessness, and the number of beds to temporarily and permanently house people experiencing homelessness as part of the Housing Inventory Count. The estimates of people and beds are reported by 399 Continuums of Care (CoC) across the United States.

What are the key findings and how does it compare to Charlotte-Mecklenburg? 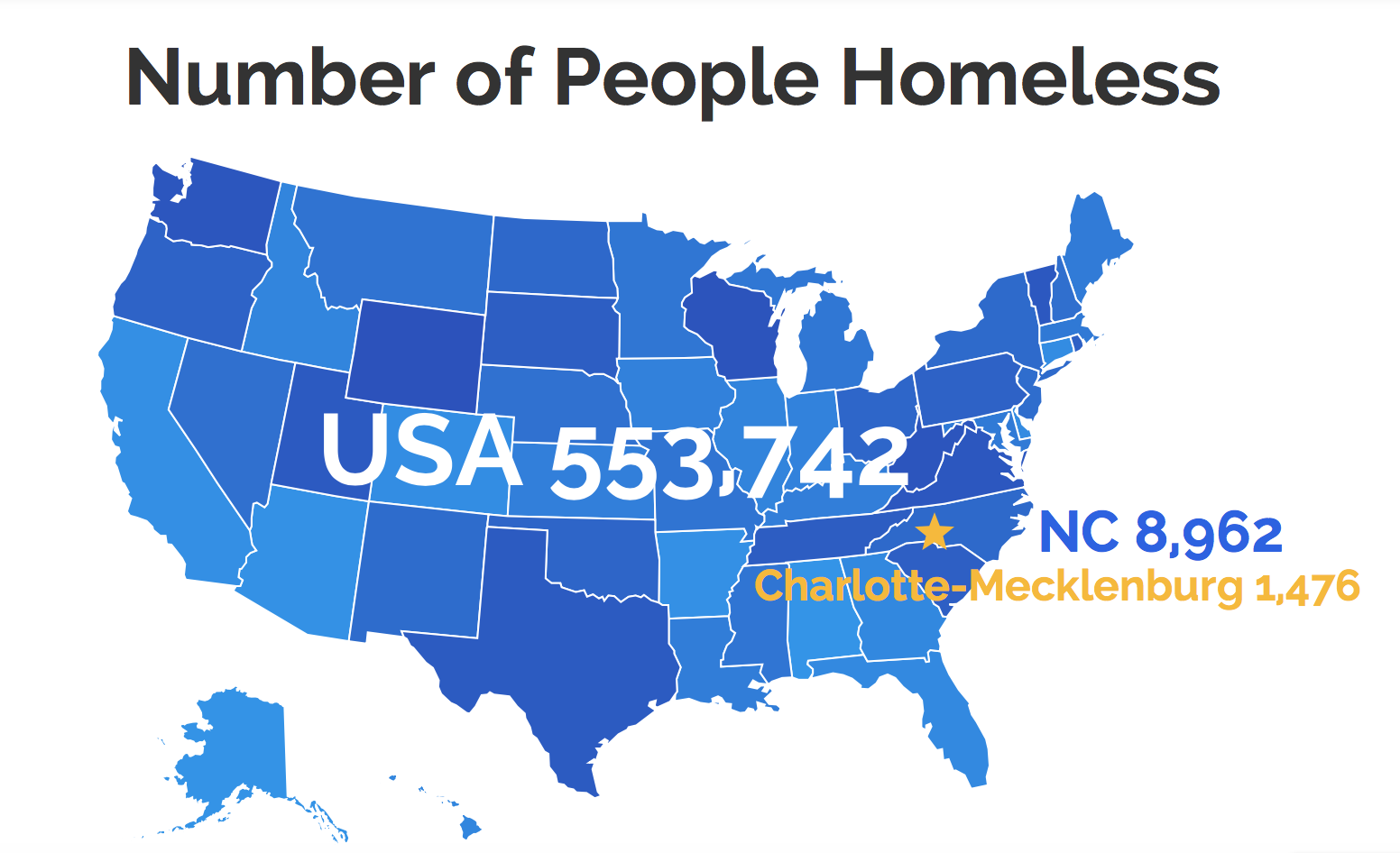 North Carolina experienced a 6.2% decrease in homelessness between 2016 and 2017 and a 26.5% decrease since 2010. Compared to national numbers, a smaller share experienced unsheltered homelessness with 27.3% (2,451) total people.

Charlotte-Mecklenburg decreased overall homelessness 12% between 2016 and 2017 and 26% since 2010. Compared to higher national and state numbers, 15% (215) of the total population of people experiencing homelessness were in unsheltered locations.

What accounts for the change?

There are 12 CoCs in North Carolina. Including Charlotte-Mecklenburg, seven of the CoCs experienced decreases in homelessness and one experienced no change. The largest percent decreases were in Gastonia/Cleveland & Gaston, Lincoln Counties CoC (24%), Greensboro/High Point CoC (21%), and Wilmington, Brunswick, New Hanover, Pender Counties CoC (17%).

A closer look at population categories

The only age group within families experiencing unsheltered homelessness that increased was among people between the ages of 18 and 24 in unsheltered locations (an increase of 317 people or 26%).

In Charlotte-Mecklenburg, the number of families with children experiencing homelessness decreased 35% (78 households) between 2016 and 2017, which was mostly due to a decrease in the population in transitional housing.

Compared to other types of homelessness, North Carolina has a lower share of veteran homelessness with 931 total veterans, comprising 1% to 2.9% of the total population of veterans across the United States.

When looking at the CoC level among smaller City, County and Regional CoCs, the Asheville/Buncombe County CoC has the fourth largest total of veterans with 239 people. There were 137 veterans in Charlotte-Mecklenburg, which experienced an 8% decrease between 2016 and 2017. The number of unsheltered veterans in Charlotte-Mecklenburg stayed relatively the same (25 in 2016 and 24 in 2017).

There were 66 unaccompanied youth in Charlotte-Mecklenburg on the night of the Point-in-Time Count with 27% (18 people) in unsheltered locations.

In Charlotte-Mecklenburg, there were 3,984 total beds available in 2017 and 65% (2,595 beds) were dedicated to permanent housing with 35% (1,389 beds) dedicated to temporary housing like emergency shelter and transitional housing.

The national, statewide and local numbers from 2017 Point-in-Time Count are helpful to understand overall trends in the work to end and prevent homelessness. Below are three takeaways to consider from the 2017 numbers.

1) Look at the full picture. The Point-in-Time Count is one of multiple data sources that provide information on progress around housing and homelessness. It is important to also look at the system performance measures which provide the rate of exit to permanent housing, average length of stay in emergency shelter and returns to homelessness. It is also critical to look at homelessness data with other data sources such as the school system. This can be done locally through the UNCC Institute for Social Capital which houses an integrated database, including homelessness and school system data.

2) It’s still about affordable housing. The high cost of housing and low rate of vacancy in communities across the United States including Charlotte-Mecklenburg, places more and more people at risk of losing their housing. The investment in permanent housing beds like permanent supportive housing and rapid re-housing has contributed to the decrease in homelessness that Charlotte-Mecklenburg has experienced since 2010.

However, with rental costs increasing and potential changes to federal funding for homeless assistance, the work to increase affordable housing – through subsidy and development – is even more critical. To read more about the trends in worst case housing needs, read this 2017 report.

3) We need a system wide approach. The challenges and solutions to housing and homelessness are connected to other areas like employment, healthcare, transportation and childcare. To end and prevent homelessness and increase affordable housing, these areas must be connected and aligned toward a common vision with shared outcomes and priorities. Coordinated Entry / NC 2-1-1, Charlotte-Mecklenburg Housing Our Heroes targeting veteran homelessness, and Housing First Charlotte-Mecklenburg targeting chronic homelessness are three local examples. To close the gap on housing and homelessness for everyone, everyone must play a role.

To get involved in the 2018 Charlotte-Mecklenburg Point-in-Time Count, email Courtney Morton at Courtney.Morton@MecklenburgCountyNC.gov